A few days ago, Sundae Horn, our local community librarian, sent me a copy of the sheet music for “The Ocracoke School Song.” Arnold Sundgaard wrote the words; Alec Wilder composed the music. 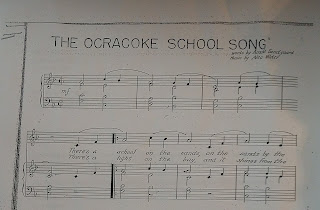 With the annual PTA Variety Show coming up, Sundae thought it would be fun for the kids to revive the song that she remembers hearing students sing once about fifteen years ago. Principal Leslie Cole located a copy in the school files and shared it with Sundae, who asked me, “Any idea who Arnold Sundgaard was?”

Not only did I have no idea who Arnold Sundgaard was, I had never seen or heard of the song.

As it turns out, the story is quite interesting. Sundgaard was a nationally recognized American playwright, librettist, and lyricist.Wilder was a prominent composer.

You can read the story of how two nationally known artists came to create "The Ocracoke School Song" and download the complete sheet music from our latest Ocracoke Newsletter at https://www.villagecraftsmen.com/the-ocracoke-school-song/.

To be notified when we publish a new post simply add your email address in the box at the top right and click "submit."
Posted by Philip at 5:52 AM No comments:

Although tomorrow, (March 17) is St. Patrick's Day, today (March 16) has traditionally been more recognized on Ocracoke Island. This is Old Quawk's Day. Almost every year I relate the legend of Old Quawk.

About 200 years ago there lived on Ocracoke Island a fisherman of indeterminate provenance. He was a reclusive figure, preferring to live in a small hut made of driftwood and bullrushes about 5-6 miles from the village. No one remembers his given name, but folks called him "Old Quawk" because, they said, he "quawked" like an old night heron.

Old Quawk was a bold fisherman, often venturing out into Pamlico Sound in his sail skiff when cautious islanders stayed in port waiting for more propitious weather.

On this date, March 16, many years past, Old Quawk made his last voyage into Pamlico Sound. Storm clouds were piling up in the darkening sky. 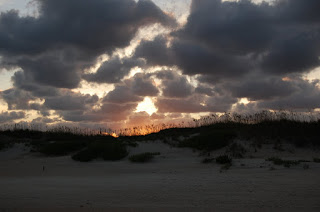 Legend has it that Old Quawk defiantly disregarded the warnings of other islanders, raised his clenched fist to the heavens and dared the gods to thwart him, then set out in his sail skiff. A frightful gale churned the Sound into a wild turbulence and swamped Old Quawk's tiny craft. Neither Old Quawk nor his boat were ever found.

For many years Ocracoke fishermen refused to go out in their boats on March 16. Even today it's best to be prudent on Old Quawk's Day. There's no telling what the weather gods will dish out on March 16.

A Visit to the Clinic

A few years ago a native islander walked into our local clinic and announced that she was suffering from the distemper. The receptionist, who had moved to the island from the mainland, duly noted the complaint as the islander took her seat in the waiting area. But the receptionist was troubled. "I thought only dogs were afflicted with distemper," she said to herself. Curious, she did a bit of research. Soon enough she discovered that distemper is, in fact, "a contagious and serious disease caused by a virus that attacks the respiratory, gastrointestinal and nervous systems of puppies and dogs." But still, she thought, maybe it is possible for humans to be infected also. Who knows?

Some days later the receptionist met the islander and inquired about how she was doing. In the course of the conversation the receptionist discovered that her neighbor did not think she was afflicted with a canine malady. Ocracoke islanders, especially of the older generations, use the term "distemper" to mean any troublesome or serious ailment like a bad cold or flu.

In fact, if you do a thorough search for the definition of distemper you will discover that "ailment" and "disorder" are also listed.

Coincidentally, I was recently reading about early American history. In early 1775 a deadly smallpox epidemic began to sweep through the colonies. By summer and fall this highly contagious disease was threatening to infect soldiers in the Continental Army. Founding Father, John Adams, commented that "The Small Pox is an enemy more terrible in my imagination, than all others. This distemper will be the ruin of every army from New England if great care is not taken."

This is one more example of  how Ocacoke's long isolation from the mainland resulted in the retention of peculiar words and phrases from the colonial period...some still in use in the 21st century.

A Secret Plot to Kill the President

According to a new book by Brad Melzer and Josh Mensch, The First Conspiracy, The Secret Plot to Kill George Washington, New York Governor William Tryon and New York City Mayor David Mathews conspired during the spring and summer of 1776 to kidnap and assassinate George Washington and his chief officers.

I had never heard of this, and I have not yet read the book, but I learned of it from a review in The Week magazine. Although there is some skepticism surrounding the allegations (one reviewer commented that there is "too thin a factual record," and another writes that "it's hard to know if Washington was ever even targeted for assassination.") I am looking forward to reading the book and learning more, especially because William Tryon, a Lieutenant General in the British Army,  had served as the 8th Governor of North Carolina (from 1765-1771) before being appointed to serve as Governor of New York. 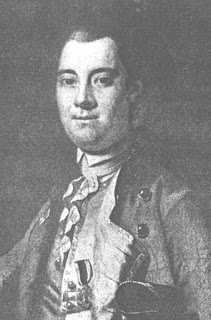 There seems to be no doubt that Tryon was a dedicated Loyalist whose policies have been described as savagely brutal. Towards the end of his tenure as NC Governor he was instrumental in suppressing the Regulator Movement (a popular uprising against corrupt colonial officials).

According to the jacket of The First Conspiracy, "This is the story of the secret plot against George Washington and how it was revealed. It is a story of leaders, liars, counterfeiters, and jailhouse confessors. It also shows just how difficult the battle was for George Washington -- and how close America was to losing the war."

Whatever is the truth about William Tryon, his legacy lives on in North Carolina. The town of Tryon is named for him, as is Tryon Hills (a prominent neighborhood in Charlotte), Tryon Road in Raleigh, Tryon Street (one in Burlington, another in Hillsborough), and of course, Tryon Palace in New Bern.

To be notified when we publish a new post simply add your email address in the box at the top right and click "submit."
Posted by Philip at 10:52 AM 3 comments: