In Celebration of a Small Town

A few days ago I was perusing a number of old island newspapers, and was amused by a 1980 article, "Ocracoke Welcomes New People." The focus of the article was five different people/families who had recently moved to the island. This is what the paper had to say about where they were living (the last one is my favorite):
Of course virtually everyone reading the article understood where the new residents were living. This is part of what makes living in a small town so wonderful.

To be notified when we publish a new post simply add your email address in the box at the top right and click "submit."
Posted by Philip at 9:45 AM No comments:

Last week I published a link to David Cecelski's on-line article about the connection between Ocracoke and Philadelphia. In that article Cecelski mentions "Old Drum," a quintessential island dish prepared from channel bass, potatoes, onions, boiled eggs, and cracklings.

He writes, "According to Blanche [Howard Jolliff], the Ocracokers in Philly had a special fondness for the bars along Delaware Avenue. So, she told me, an old saying was that if somebody ran down Delaware Avenue yelling “Old drum! Old drum!” a crowd would have poured into the street!" (Read the entire article at https://davidcecelski.com/2019/07/12/ocracoke-and-philadelphia-an-outer-banks-village-a-great-seaport-and-the-bond-between-them/.)

As fate would have it, soon after the article was written I was given a goodly portion of channel bass (drum) and blue fish. A traditional Sunday evening dinner resulted: 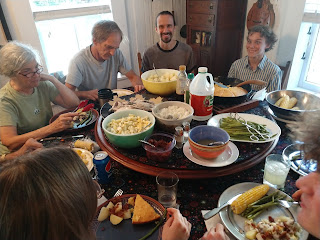 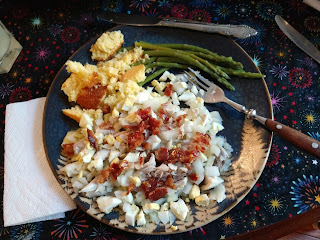 You might want to try it sometime. Here is Danny & Margaret Garrish's recipe as printed in the Ocracoke Cookbook:

The "ceremony:" Boil drum in lightly salted water until it flakes. In another pot, boil about 2 medium potatoes per person. Hard boil 2 eggs per person. Dice a good size bowl of onions. Dice and fry-out (render) salt pork until brown and crunchy.

Assemble at the table, fixing each plate individually. Mash potatoes with fork, flake drum in with potatoes and sprinkle generously with diced onion. Add salt, pepper and chop up the hard boiled egg in the mixture, adding a good helping of cracklings and grease. Sprinkle with vinegar if desired. Enjoy!

Be sure to mix enough on the first plate. Somehow the second plateful never tastes as good as the first. Never plan anything for a couple of hours after you eat this. Just slide under the table and rest a spell. Don't forget the baked cornbread and lots of butter.

To be notified when we publish a new post simply add your email address in the box at the top right and click "submit."
Posted by Philip at 6:08 AM No comments:

Two and a half years ago I wrote, "Visitors to Ocracoke are often surprised to learn that many island families have connections with Philadelphia and the surrounding area. "

Just last week, noted award-wining North Carolina historian, David Cecelski, wrote a much more thorough and illuminating article detailing the many connections between Ocracoke and Philadelphia. You can read that article here: https://davidcecelski.com/2019/07/12/ocracoke-and-philadelphia-an-outer-banks-village-a-great-seaport-and-the-bond-between-them/.

To be notified when we publish a new post simply add your email address in the box at the top right and click "submit."
Posted by Philip at 5:03 AM No comments:

Just a few days ago my cousin Lorie gave me this vintage photo of my house. I had never seen it before.


Sitting in the rocking chair on the left is my grandfather, Homer Howard (1968-1947); in the rocker on the right is my grandmother, Aliph O'Neal Howard (1876-1950). My grandfather appears to be in his mid-30s; my grandmother, in her mid-20s. My uncle, James Enoch, was born in January, 1903. If he is the baby in the picture, my grandmother would have been 27 years old, and my grandfather, 35 years old. In 1903 my uncle Marvin (the young boy in the photo?) was 6 six years old, and my aunt Agatha (one of the two girls?) was nine years old. I don't have a guess about who the other girl might be.

There are several interesting details in this photo. My father (Lawton, b. 1911) always told me he understood there was at one time an open porch on the back of the house (where the kitchen is today; originally the kitchen was a separate building behind the house), but did not remember it. If you enlarge the photo you can clearly see the open porch.

We believe the house was built about 1865. In this photo the windows have "six over six" sashes (six lights or panes in each sash), a typical 19th century arrangement. Later the windows were replaced with two over two sashes, a style that did not become popular until the late 1800s/early 1900s.

The four dark objects on the roof are not holes or openings; they are handmade "roof jacks" used to provide safe footing while installing or repairing a sloped roof. Note the wooden scaffolding on the far side of the house.

Below is a photo of the house today: From 1717 to the summer of 1718 William Howard served as quartermaster (senior officer) of Blackbeard's crew.

Lt. Robert Maynard and his Royal Navy sailors defeated Blackbeard in a naval battle at Ocracoke on November 22, 1718.  After the battle the sixteen surviving pirates (Blackbeard was killed, so was not among them) were taken to Virginia to stand trial. According to most accounts, all but two were convicted and hanged by the neck.* Samuel Odel was released because he just happened to be aboard Blackbeard's ship and was not actually a member of the pirate crew. Israel Hands, former sailing master, was pardoned, perhaps because he had been crippled by a gunshot from Blackbeard some time before the final battle.

As it turns out, William Howard had departed Blackbeard's company in July or August, 1718. Shortly thereafter he was among those seen in taverns in coastal Virginia. Alexander Spotswood, Governor of Virginia, had William Howard seized as a vagrant seaman having no lawful business in Virginia.


Criminal proceedings were instituted against him. In spite of employing John Holloway, "one of the chief lawyers" of the colony, Howard was tried without a jury, and convicted of "Pyracy and Robbery" on the High Seas.

William Howard was found guilty of piracy and sentenced to be hanged. Fortunately for him, on the night before his scheduled execution the king's Act of Grace (pardon for all piratical acts committed before July 23, 1718) arrived in Williamsburg. William Howard was released...good news for all residents of Ocracoke who can trace their roots to William Howard!

*Kevin Duffus, author of The Last Days of Black Beard the Pirate, contends that most of Black Beard’s captured crew members were not hanged in Virginia and that several returned to their communities in eastern North Carolina.