Frederick Augustus Olds (1853-1935)  was a North Carolina historian, newspaper columnist, lecturer, and editor who was an early advocate of preserving and sharing the history of North Carolina and her people.

In a new book by Larry E. Tise, Circa 1903, North Carolina's Outer Banks at the Dawn of Flight, the author devotes Chapter 6 ("A Jaunt Around the Carolina Coast") to the 1908 recollections of Col. Frederick A. Olds. 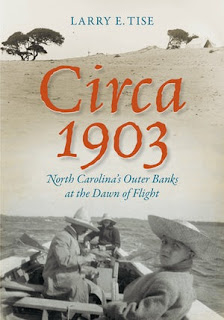 According to Tise, Olds describes Ocracoke's "snowy white lighthouse," mentions the Doxsee Clam factory, and comments on the island's competing Northern and Southern Methodist churches. He is also fascinated by the "refreshing...broad dialect" of the locals.

Olds was one of the early writers to observe that the residents of Ocracoke and other Outer Banks villages were "the only North Carolinians who had the privilege 'of seeing the sun rise from and set in the water....'"

Look for Tise's book in your local library or independent book store.

To be notified when we publish a new post simply add your email address in the box at the top right and click "submit."
Posted by Philip at 9:13 AM 5 comments: