Just a few days ago my cousin Lorie gave me this vintage photo of my house. I had never seen it before.


Sitting in the rocking chair on the left is my grandfather, Homer Howard (1968-1947); in the rocker on the right is my grandmother, Aliph O'Neal Howard (1876-1950). My grandfather appears to be in his mid-30s; my grandmother, in her mid-20s. My uncle, James Enoch, was born in January, 1903. If he is the baby in the picture, my grandmother would have been 27 years old, and my grandfather, 35 years old. In 1903 my uncle Marvin (the young boy in the photo?) was 6 six years old, and my aunt Agatha (one of the two girls?) was nine years old. I don't have a guess about who the other girl might be.

There are several interesting details in this photo. My father (Lawton, b. 1911) always told me he understood there was at one time an open porch on the back of the house (where the kitchen is today; originally the kitchen was a separate building behind the house), but did not remember it. If you enlarge the photo you can clearly see the open porch.

We believe the house was built about 1865. In this photo the windows have "six over six" sashes (six lights or panes in each sash), a typical 19th century arrangement. Later the windows were replaced with two over two sashes, a style that did not become popular until the late 1800s/early 1900s.

The four dark objects on the roof are not holes or openings; they are handmade "roof jacks" used to provide safe footing while installing or repairing a sloped roof. Note the wooden scaffolding on the far side of the house.

Below is a photo of the house today: 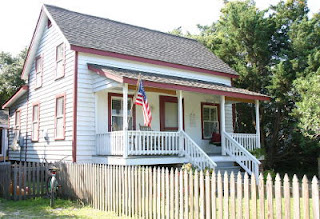