David Williams (1858-1938) was a surfman at the US Life Saving Station at Cedar Hammock (just south of Hatteras Inlet) in the late 1800s. When keeper James Howard retired in 1903, David Williams became keeper. He served in that post at Cedar Hammock until 1905. In that year he was transferred to the new station built in Ocracoke village.

Captain Dave and his wife, Alice Wahab Williams, lived on the north side of Cockle Creek (Silver Lake). In the late 1990s their house was acquired by the Ocracoke Preservation Society and moved to its present location where it serves as the Society's museum, gift shop, research library, and offices.

Captain Dave and Miss Alice have no direct descendants living on Ocracoke Island. They are buried, along with children and their spouses, in a brick-enclosed cemetery near the British Cemetery and the George Howard Cemetery. Within the last year, briars, vines, and weeds began encroaching on the markers and brick walls. Saturday morning Bill, Dave, Ralph, Andrew, DeAnna, and I (members of the Ocracoke Preservation Society) met at the cemetery with rakes, clippers, weed eaters, and a grass cutter. By the end of thirty minutes the cemetery was neatly trimmed and presentable once more.

The Ocracoke Civic & Business Association is negotiating with island contractors to repair the brick wall.

Click on any photo below to see what's been done.

The Williams Cemetery before the Cleanup: 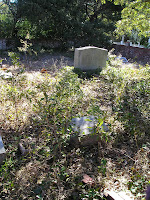 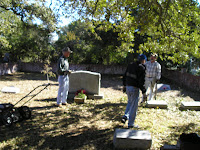 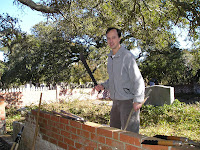 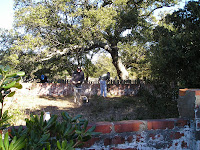 Our latest Ocracoke Newsletter is the story of a 1911 wedding on Portsmouth Island. You can read it here: http://www.villagecraftsmen.com/news022111.htm.
Posted by Philip at 6:06 AM