Edward Farrow (1839 - 1878) was the son of Wilson Tilmon Farrow, Sr. (1798-1880), Ocracoke resident and member of the state legislature. Ed Farrow married Lucretia Credle Wahab (1848 - 1930). Their home was located where Berkley Manor is today. Sam Jones, owner of Berkley Machine Works in Norfolk, Virginia, bought the house more than a half century ago, and built the newer part around the old house. Edward Farrow is buried in the front yard. 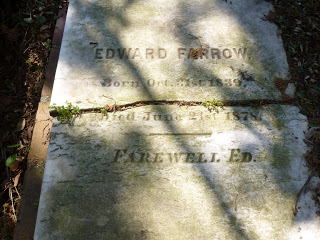 This month's Ocracoke Newsletter is a chapter from Philip Howard's book, Digging up Uncle Evans, about the 1837 wreck of the Steamboat Home, one of the most horrific wrecks ever on the North Carolina coast. You can read it here: https://www.villagecraftsmen.com/the-1837-wreck-of-the-steamboat-home/.
Posted by Philip at 6:00 AM