A number of years ago I came into possession of a 1976 manuscript that had been housed in the University of Iowa Library system. Titled Epitaphs for Voice Oboe & Harpsicord (or Piano), it was composed by Lewis Phelps, winner of the 1976-1977 Composition Competition of the National Association of College Wind and Percussion Instructors.

Phelps' preface to his compilation of twelve "miniature songs" explains that "Epitaphs, written to extol the virtues of the deceased, often reveal something about the survivors as well, and present an interesting commentary on humankind generally." His compositions use texts that are "actual inscriptions found in cemeteries from New York to Arizona," selected from "American Epitaphs by Charles L. Wallis."

The composer's ninth selection is based on the epitaph (one commentator has called this epitaph a "convoluted tribute") found on the tombstone of Agnes Howard (1780 - 1857), located in the old George Howard cemetery on British Cemetery Road:

"She was!
But words are wanting to say what.
Think what a wife should be.
She was that." 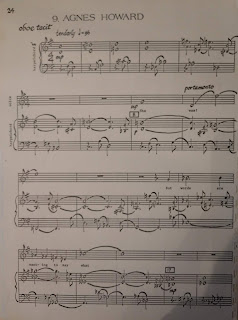 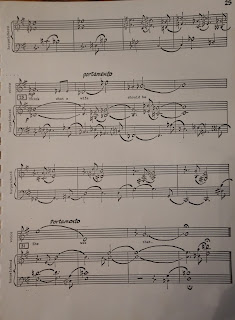 Phelps explains that "Epitaphs is written for a small one-manual harpsichord with a range of four octaves, 8' and 4' hand-operated stops, with a lute on 8'. When a larger instrument is used, the registration may be adjusted slightly.... Dynamic markings which appear in the keyboard part are intended for piano."

Maybe some of our readers will enjoy playing and singing ("tenderly," advises the author) this song based on the epitaph of Agnes Howard from Ocracoke Island.

To be notified when we publish a new post simply add your email address in the box at the top right and click "submit."
Posted by Philip at 6:52 AM