William Charles Thomas was born March 23, 1857 in Elizabeth City. He was a sea captain, and married Ocracoke native Eliza Gaskill. Sometime in the late nineteenth century Capt. Thomas was in the harbor at St. Kitts in the Caribbean. There he noticed a stately two story home with a prominent center cross gable, saw-tooth trim boards, sturdy wooden shutters, and a full length two story front porch.

Captain Thomas made a sketch of the house and brought it to his brother-in-law, Mr. Charlie Scarborough, one of Ocracoke's most respected carpenters. Mr. Charlie had all of the lumber brought to the island from the mainland, and built this replica for Capt. Thomas and Miss Eliza for $50.00. 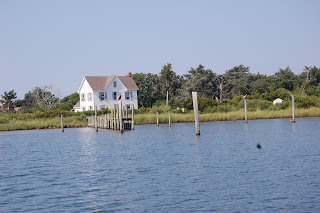 Just a few months earlier the "Old August Storm of 1899" had flooded many island homes, including Mr. Charlie Scarborough's. Determined to minimize the damage from future hurricanes, Mr. Charlie cut a trap door in the living room floor to allow flood waters inside to prevent the house from being washed off its foundations. During the hurricane of 1944 the two-story front porch was blown away.

The older bird carver who some years ago sat outside near the Capt. Thomas home was Clinton Gaskill. He died in 1999 at the age of 93. Clinton was Miss Eliza's nephew. Clinton's grandmother (Eliza's mother) was Sarah Owens, one of Ocracoke's early school teachers. Sarah Owens was a cousin of Susan Dimmock (1847-1875), the first female surgeon in North Carolina. You can read more about the Thomas home and Susan Dimmock in my book, Digging up Uncle Evans.

Our latest Ocracoke Newsletter is a tribute to independent spirit and island character Don Wood. You can read it here: http://www.villagecraftsmen.com/news062110.htm.