On Friday I posted a photo of a rusted and twisted piece of metal. As several of our readers knew, it is a section of WWII-era steel landing mat. Our military used them for amphibious landings in Europe.

In 1957 North Carolina built the first hardened road from the village to Hatteras Inlet. However, the last three miles was not paved. Instead, one lane of WWII landing mats was laid down. Every half mile a short section was added to allow one car to pull over so an approaching vehicle could pass. There were never any head-on collisions, but, as you might imagine, cars regularly had to back up when two vehicles met between the pull-overs.

The section of mat I photographed was lying in the sand down the hill from the remnants of the Navy's 1942 radar tower on Loop Shack Hill, which is on the left of Highway 12, just past the edge of the village.

Today, only the fractured concrete base of the tower remains. Originally the Loop Shack included a square wooden housing (with shuttered windows) mounted on the base. A metal grid-work tower rose above the house. Concrete communications buildings were located nearby. 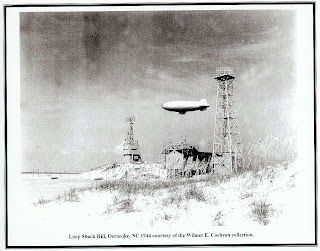 Earl O'Neal, in his book "Ocracoke Island, Its People, the U.S. Coast Guard and Navy Base During World War II" has this to say:

"At the Loop Shack the Navy had radar and jamming equipment which was all very new, along with new listening equipment controlled from shore, and radio high frequency direction finding gear. This gave them the capability to locate the German U-boats that may have gotten past the floating mines and anti-submarine nets which were placed along the coast by the Navy. All activities were kept secret and all that the people knew was what they saw."

﻿Our latest Ocracoke Newsletter is the story of the "Joe Bell" flower. You can read it here: http://www.villagecraftsmen.com/news012112.htm.
Posted by Philip at 6:05 AM