Ocracoke has for a long time attracted various eccentrics. In the late 1950s through the early 1960s Bill Askren lived on the island. Bill drove an old car to Ocracoke, parked it on a sand hill, and lived in it. Later he moved into a small building on present-day Ocean View Road. He cultivated a garden, kept mostly to himself, and lived a simple, uncomplicated life. 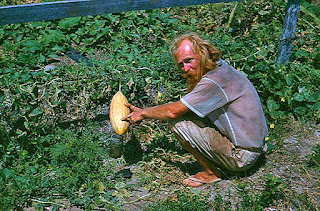 From Ocracoke, Bill Askren moved to California to be closer to his family. For more than three decades Bill stayed in California, spreading his message of peace, the simple life, and healthy living.

He was 82 years old when he died April 7, 1999. Bill Askren is buried in Riverside National Cemetery in Riverside, California.

Older islanders still remember Bill fondly. He is one of a number of unconventional people who discovered that Ocracoke is generally a non-judgmental community that embraces folks who march to different drummers.

This month's Ocracoke Newsletter relates the story of the prohibition-era rum runner Messenger of Peace that brought much pleasure to the residents of Portsmouth. You can read it here: http://www.villagecraftsmen.com/news062115.htm.
Posted by Philip at 6:08 AM