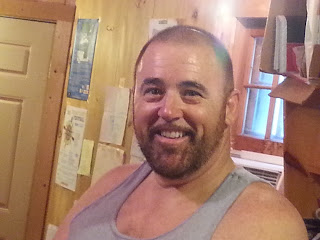 Dale, a descendant of the earliest island residents, has lived on Ocracoke his entire life. On August 4 Dale departs for a two year adventure as postmaster in Unalakleet, a small Alaskan village with a population of under 700 native Inupiat. He begins his new post on August 10. Unalakleet is located on the Norton Sound of the Bering Sea, 148 miles southeast of Nome and 395 miles northwest of Anchorage.

With his quirky, funny and exuberant demeanor, Dale has often been described as "one of a kind." We wish Dale well on this new venture, but everyone who knows him is sure that the Inupiat don't have a clue about what they are in for!

We hope Dale will keep us informed of his discoveries and adventures. And we hope to see him back home after two years.

This month's Ocracoke Newsletter tells the delightful story of the 19th century "Stovepipe Hat" wreck. It has been told for years in books & magazines, but it probably never happened. You can read the story (and my research) here: http://www.villagecraftsmen.com/news072115.htm.
Posted by Philip at 6:13 AM