I have been re-reading Carl Sagan's excellent book The Demon-Haunted World, Science as a Candle in the Dark. Sagan devotes four pages to recognizing "the most common and perilous fallacies of logic and rhetoric." The fallacy of "Confusion of Correlation and Causation" reminded me of the following photo I took more than a month ago.

As I was walking along the Hammock Hills Nature Trail in August I noticed hundreds of these small fiddler crabs scurrying along the path. It was difficult to negotiate the trail without crushing the little guys! According to island folklore, when fiddler crabs (also called mud crabs) congregate in great numbers, it is a harbinger of an impending hurricane; not a causation but at least a meaningful correlation. 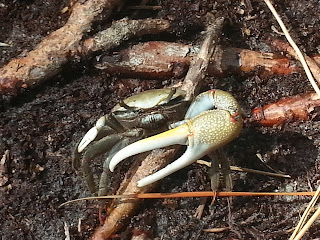 So, did a hurricane ensue? Well...a month or so later Joaquin did travel offshore, affecting weather patterns and at least indirectly bringing us copious amounts of rain. Of course, the fiddler crabs did not cause the hurricane or the rain, but is there a meaningful correlation?

I am convinced that fiddler crabs appear in large numbers every year at about the same time (does it have something to do with their life cycle?), and that this simply coincides with the peak hurricane season. I doubt if the fiddler crabs somehow "know" that a storm is brewing. I doubt it. What do you think?

This month's Ocracoke Newsletter is a reproduction of a 1960s booklet titled The Great Ocracoke Cat Hunt. You can read it here: http://www.villagecraftsmen.com/news092115.htm.
Posted by Philip at 6:11 AM