According to Wikipedia, Alphaeus Philemon Cole (July 12, 1876 – November 25, 1988) "was an American artist, engraver and etcher. He was born in Jersey City, New Jersey and died in New York City. ... At the time of his death, at age 112 years and 136 days, Alphaeus was the world's oldest verified living man." 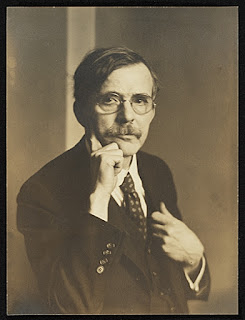 According to an article in the October, 2010 issue of Virginia Living magazine, Sam's patronage of Alphaeus Phelemon Cole resulted in a CBS TV national interview with the famous portrait artist. When the interviewer asked Cole about affairs he may have had with his models Sam Jones became incensed and "emerged from backstage brandishing a broom and began swatting the interviewer and the production crew. The interview was unceremoniously aborted."

You can read more about Sam Jones here:  http://www.villagecraftsmen.com/news012111.htm.

Our latest Ocracoke Newsletter is the story of Capt. Horatio Williams and his schooner, the Paragon. You can read the story here: www.villagecraftsmen.com/news112115.htm.
Posted by Philip at 5:27 AM