This is our latest post about Ocracoke landmarks named for prominent islanders...Spencer's Market. 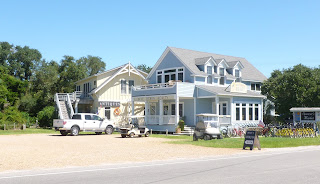 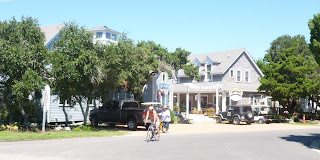 Spencer's Market is the location of two eateries, an antique shop, a sunglasses shop, a realty, golf cart rentals, and studio apartments. But who is Spencer?

Herman was a fisherman and bird carver. For many years Village Craftsmen sold small hand-carved seagulls and pelicans that Herman made.

Herman also had a very dry sense of humor. He came by one afternoon with some birds to sell as we were filling a galvanized tub with water. We stepped inside to look at his carvings. After negotiating about his birds for about 40 minutes (including neighborly chatting), he turned to leave. On his way to the door he off-handedly remarked, "I reckon that galvanized tub is about filled up by now." Of course, it had been overflowing for more than half an hour!


The last folks to live in the house were Herman and Flossie's daughter, Gaynelle, and her son, Ricky. Gaynelle is well-known on the island as a baker of delicious fig cakes. She and Ricky also preserve figs that we sell in Village Craftsmen. In addition, Ricky works for the NC Ferry Division and at the Silver Lake Motel.

The house has been moved down the street. Today it is painted red, and houses the Ocracoke Pizza Company.

Our latest Ocracoke Newsletter is the story of Capt. Horatio Williams and his schooner, the Paragon. You can read the story here: www.villagecraftsmen.com/news112115.htm.
Posted by Philip at 5:36 AM