Hunting and decoy carving are time-honored traditions on Ocracoke Island. Years ago, when mass-produced plastic decoys were introduced, many hunters discarded their heavy wooden decoys. Some were even tossed into wood stoves and used as firewood! Eventually islanders realized that their hand-carved ducks were works of art, and were becoming collectable and quite valuable.

As a result, a number of Ocracokers began making smaller decorative bird carvings (gulls, terns, wading birds, etc.) for the tourist trade. A few months ago I discovered a box of my father's unfinished carvings in the attic. The picture below shows one small "blank," three partially finished carvings, and one completed shore bird. 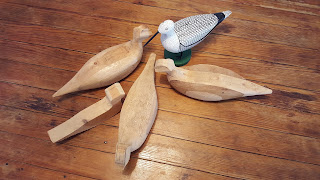 More Ocracoke Island decoys and carvings can be seen at the Preservation Museum. Stop in sometime to take a look at all of the displays.

Our latest Ocracoke Newsletter is Ellen Marie Cloud's first person account of the "Great Ocracoke Lighthouse Windows Heist." You can read it here: http://www.villagecraftsmen.com/news012117.htm.
Posted by Philip at 5:47 AM