During the War of 1812 the Outer Banks served an important roll by providing a base of operations for American privateers (privately owned armed ships holding a government commission and authorized for warfare, especially in the capture of enemy merchant shipping).

One of the most successful privateers of the time was captain Otway Burns. 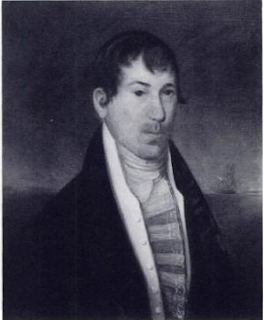 Burns was born in eastern North Carolina, near the small town of Swansboro. His clipper ship, the Snap Dragon, was armed with four 12 pound guns and a pivot gun. His main base was on Bogue Banks, but he frequently anchored at Ocracoke. In his first seven months as a privateer Burns captured ten British vessels (and took 250 prisoners). He plundered the ships for one million dollars worth of cargo.

In 1834 the town of Burnsville was established in the Appalachian Mountains of North Carolina. The town was named after Captain Otway Burns, a tribute to one of the most celebrated naval heros of the War of 1812. In 1909 a statue of Captain Burns was given to the town by Capt. Burns' grandson, Walter Francis Burns, Sr. and was displayed in the center of the town square.

This month's Ocracoke Newsletter is the story of Mrs. Godfrey's ghost who haunts the Island Inn/Odd Fellows Lodge. The story is taken from Chapter Three of my book, Digging up Uncle Evans. You can read the account here: https://www.villagecraftsmen.com/mrs-godfreys-ghost/.
Posted by Philip at 5:18 AM