Today is not only Thanksgiving Day...it is also the 300th anniversary of the Battle at Ocracoke. In 1718 Lt. Robert Maynard of the British Royal Navy, with his sailors, defeated the pirate Blackbeard just off shore of Springer's Point on Ocracoke Island. 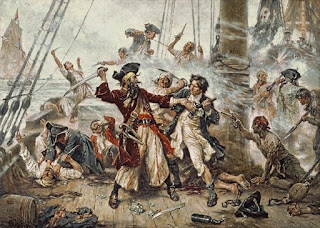 For the very first time Ocracoke Island, with sponsorship of the Ocracoke Preservation Society and the Ocracoke Civic and Business Association, is celebrating this historic battle and the British sailors who had a major role in ending "The Golden Age of Piracy." For more information go to the OPS web site: https://ocracokepreservation.org/300th-anniversary-of-the-battle-at-ocracoke/

This month's Ocracoke Newsletter is Lachlan Howard's essay about the Fresnel Lens and its use in theater, solar ovens, cameras, and industry, as well as lighthouse illumination. You can read it here: https://www.villagecraftsmen.com/the-fresnel-lens/.
Posted by Philip at 5:56 AM