Yesterday I shared this OPS picture of the Island Inn & JoKo Gallery. The photo was made about 1973 or 1974. 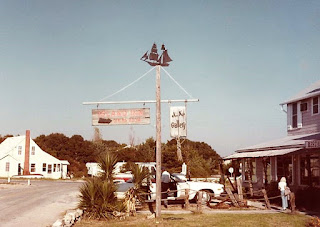 One of the OPS staff asked me about the white house in the left background, where Spencer's Market is today. That was the home of Herman and Flossie Spencer. Some of our long-time visitors will remember that Herman and Flossie were the parents of Gaynelle Tillett (d. 2018, https://ocracokeobserver.com/2018/05/06/gaynelle-spencer-tillett-an-ocracoke-brand/), and grandparents of Ricky Tillett. When the property was sold, the house was moved to make room for the present development. The house is now located just a short distance away. It is painted red, and has been converted to Sorella's Pizza & Pasta restaurant.

In the early 1970s Ocracoke had no municipal water system. Residents and businesses were collecting rain water from their roofs and storing it in cisterns next to their houses for drinking and cooking. We built our home/business (Village Craftsmen) on Howard Street at that time, knowing that "city water" would soon be coming to the village. So we did not build a cistern. We simply put a large galvanized tub on the back porch and periodically filled it with a garden hose from my parents' house.

We had just started filling the tub when our neighbor, Herman Spencer, stopped by to show us some small birds he had carved. He was in his late '60s at the time, and had been supplying us with a few of his carvings. We invited Herman into the store, and took a look at his birds. We couldn't afford to buy them all, so we sorted through them, asked how much he wanted for them, and chose several. He was in no hurry, so we chatted and shared a few stories. Finally we wrote him a check, put the rest of his birds back in his box, and walked him to the back door..

As he was getting ready to open the door he turned to us with that typical Ocracoke Island nonchalance and dry wit, and said, "I reckon that tub is about filled up by now."

Of course, the tub had been running over for quite some time! Herman just casually walked back home.

This month's Ocracoke Newsletter is Lachlan Howard's essay about the Fresnel Lens and its use in theater, solar ovens, cameras, and industry, as well as lighthouse illumination. You can read it here: https://www.villagecraftsmen.com/the-fresnel-lens/.
Posted by Philip at 6:06 AM