On January 3 I mentioned the story of Ocracoke schooner captain Horatio Williams who sank his vessel, the Paragon, in 1861 to prevent her use by Confederate forces or capture by Union forces. A reader questioned the veracity of the story and doubted if any technology was available to allow Captain Williams to refloat his schooner after the end of the war, as I reported.

Captain James Horatio Williams, at the helm of a different schooner, in 1887 (60 years old): 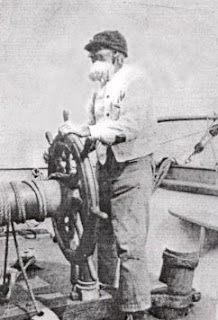 On February 13, 1949 a lengthy newspaper interview with Captain Horatio's son was published in The News and Observer, Raleigh, N.C. After recounting in detail his father's ordeal in Charleston harbor when Confederate soldiers fired on Fort Sumter, his father's escape under cover of darkness, and the intentional sinking of the Paragon, the interview continues:

“’No, sir,’ he [Horatio Williams' son] said, ‘that’s not the end of the story. The Paragon sailed again. That she did. And my father sailed her. She was some ship right up to the time she went down off Frying Pan Shoals in ’85….

“’Well, now, after my father sank the Paragon up the Roanoke River, he came back here to Ocracoke. He reckoned he would take a rest until the war was over. He didn’t have no grudge against anybody and he wasn’t going to do any fighting. He didn’t either. He fished a bit, had a little boat of his own. He always managed to be away from home when the officers came over to get fellows for the army.’

“Horatio the second leaned back in his chair. He seemed to be thinking. Except for his white hair he didn’t look a man of 75.

“’When the war was over,’ he continued, ‘my father didn’t make no move right away to go get the Paragon. Meanwhile, Jobie [builder and half-owner of the Paragon] had died [in 1860] and Henry, that was Jobie’s son, was over on the mainland running a cotton gin and sawmill, at Germantown. Finally, my father went to see him and they talked about raising the Paragon. It was 18 months after the war was over that they raised her.

“’It was quite a job, too. They had to pontoon her with barrels until her decks were above water. They pumped the water out of her with hand pumps. She wasn’t damaged in the least. She had been in fresh water. You know, in the old days when they built ships they docked them before they was finished, that is, they let them lie in fresh water for a while. So the Paragon, wasn’t hurt none. And the heart of red cedar, of which she was built, won’t rot. So she was just about as good as ever. And that canvas my father buried was still in good condition, too.

“’They sailed the Paragon right down the Roanoke to Ocracoke and put her in the trade again.

“’When I was a boy, I sailed with my father several times on the Paragon. I used to go with him to Swan Quarter to load grain.

“’I remember that then the Paragon had a crew of six…three sailors, a mate, cook and captain. She could carry 85 ton in her hold and she drew eight feet of water.'"

I hope that settles the issue. The sinking and raising of the Paragon is a story that Ocracokers have passed from one generation to the next for a century and a half.

Our latest Ocracoke Newsletter is the story of Ocracoke and the "Lost" Colony. You can read it here: http://www.villagecraftsmen.com/news112111.htm.
Posted by Philip at 5:58 AM