Pinta Williams (1905-1954) was the son of Captain David Williams (keeper of the first US Life Saving Station in Ocracoke village) and Alice Wahab. He was married to Wilma Austin ("Miss Wilma" was the daughter of Leon Austin, one of Ocracoke's lighthouse keepers). Pinta and Miss Wilma had one daughter, Alice Bell.

Pinta was a duck hunter, and he carved many a wooden decoy. Pictured below is one of his brant decoys. Note the original paint and lead anchor weight which was attached to the decoy by a long cord. 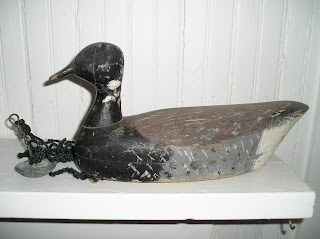 We are now in the middle of duck hunting season. Brant and various other ducks may be hunted in North Carolina coastal waters until January 28. However, most modern day hunters use lighter plastic decoys. Unfortunately, many Ocracoke islanders destroyed their handmade wooden decoys once plastic ones became available. I remember Wallace Spencer telling me he chopped his up with a hatchet to burn in his wood stove. Only later did he realize what a mistake that was!
If any of our readers have Ocracoke waterfowl hunting stories, please leave a comment. We'd love to hear from you.
Our latest Ocracoke Newsletter is the story of Ocracoke and the "Lost" Colony. You can read it here: http://www.villagecraftsmen.com/news112111.htm.
Posted by Philip at 5:40 AM