Several weeks ago one of my neighbors called and left a message on my phone. He had just acquired some pewter plates that he wanted me to see. 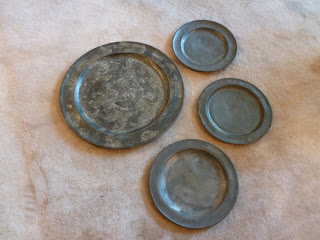 This dinnerware (the large plate is about 12" in diameter) was salvaged at an old home site near Pamlico Sound about 75 years ago by a young girl who was visiting the island from the mainland. She recently sold the plates at a yard sale, and the buyer returned them to Ocracoke.

Two of the plates have "London" embossed on the reverse side, but we were unable to locate a date. They appear to be from the 1700s. Who knows, they may even have belonged to Blackbeard.

Click on this link to see a photo of very similar pewter plates that were salvaged from Blackbeard's flagship, the Queen Anne's Revenge: http://news.ncdcr.gov/2013/05/30/pirate-talk-and-pirate-treasure-at-cultural-resources-western-office-on-june-8/. They are strikingly similar. I understand that salvors of the Queen Anne's Revenge confirm that these Ocracoke plates are of the same vintage.

Our latest Ocracoke Newsletter is an account of the recent skirmishes islanders have had with North Carolina legislatures over the issue of ferry tolls...and a 1955 newspaper editorial advocating free, state-operated ferries across Hatteras Inlet. You can read it here: http://www.villagecraftsmen.com/news082113.htm.