Today I will share information about Kevin Duffus' 2008 book, The Last Days of Black Beard the Pirate. Kevin Duffus has done extensive research on the life of "Edward Thatch," research that leads to the conclusion that much of conventional "wisdom" about this most notorious of pirates is wrong.

Duffus writes that "[h]istory remembers the infamous Black Beard as one of the greatest, most successful pirates who ever lived—a paragon of pirates. But what if history got it wrong?" He claims that "many historical accounts describing the pirate’s last days—the six months following the wreck of the Queen Anne’s Revenge at Beaufort Inlet—were inaccurate, insufficiently researched, and, as it turned out, not nearly as interesting as the truth. 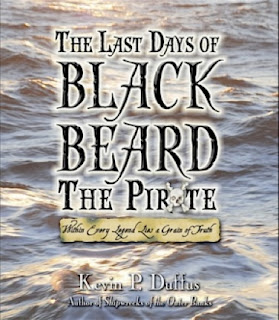 Kevin Duffus' book, which is richly illustrated with full color photographs, is a "must read" for anyone interested in the true story of Black Beard the pirate.

Our latest Ocracoke Newsletter is a brief history of the Soundfront Inn, one of the oldest structures on the island. You can read it here: http://www.villagecraftsmen.com/news102113.htm.