In the early 1970s there were only a few nesting pelicans on the Outer Banks. The widespread use of DDT had caused pelican egg shells to grow unnaturally thin, and the embryos did not develop to maturity. Once DDT was banned in 1972 the brown pelican made a dramatic comeback. Today hundreds (probably thousands) of these birds can be seen in coastal North Carolina. This photo was taken from the deck of the Cedar Island ferry in October, 2013. These birds congregate on the spoil island near the channel that passes by the sunken dredge Lehigh. Click on the photo (and follow directions to the right) to view a larger, better quality image. 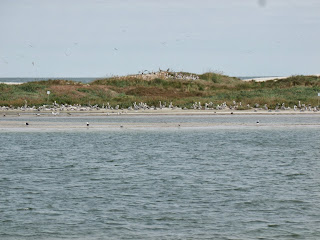 Our latest Ocracoke Newsletter is a 1921 letter written by a former slave, Harrison Williams, to Ocracoke native, Martha Ann Howard Wahab. You can read it here: http://www.villagecraftsmen.com/news112113.htm.
Posted by Philip at 5:46 AM