Ocracoke Island natives, Walter and Edgar Howard, made a name for themselves on the vaudeville stage in New York and other cities. Edgar played banjo, and Walter played guitar, harmonica, jug, ukulele and washboard. Walter was also a vocalist.

The following clipping (courtesy Walter Howard, Jr.) was from 1926, when Walter was a member of the cowboy band, "The Five Harmaniacs." 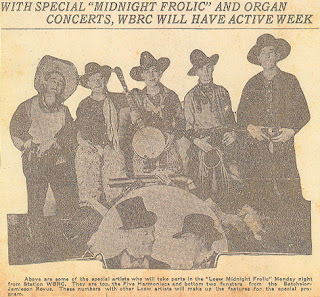 The caption under the photo reads "Above are some of the special artists who will take part in the 'Loew Midnight Frolic' Monday night from station WBRC [Birmingham, Alabama]. They are top, the Five Harmaniacs and bottom two funsters from the Batcheler-Jamieson Revue. These numbers with other Loew artists will make up the feature for the special program."

Walter Howard is on the right. The other members of his band were Jerry Adams, Wayne Durand, Ned Nestor, and Clyde Shugart.

You can read more about the Five Harmaniacs here: http://www.redhotjazz.com/5harmaniacs.html.

Out latest Ocracoke Newsletter is a reprint of a 1948 article about the Mail Boat Aleta, "Boat Hauls Mail, More." You can read it here: http://www.villagecraftsmen.com/news032114.htm.
Posted by Philip at 5:21 AM