Not long ago I was on the early morning Swan Quarter ferry, passing the spoil island near the wreck of the dredge Lehigh.  A steady line of cormorants was on its way to the ocean. Thousands of black birds, flapping their wings just inches above the water, flew steadily along. As the ferry approached, the line broke, as some hurried on ahead, and others veered away to rejoin their line behind the ferry.

Double-crested cormorants winter near Ocracoke Inlet in the thousands...probably in the tens of thousands. Every morning they leave the low-lying sandy islands in the sound and head out into the ocean. By mid-afternoon they are returning in a seemingly endless line. If you enlarge the following photo you can see more than a dozen cormorants just off-shore as they are traveling in for the evening. 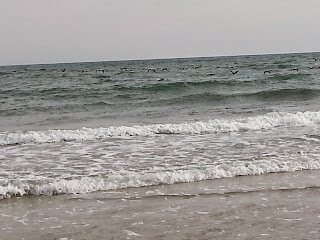 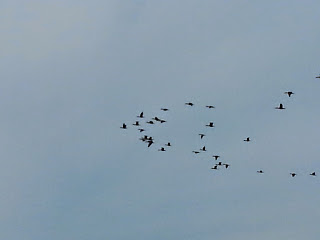 Cormorants are coastal (not pelagic) birds that eat fish, and can often be seen diving for their prey. World wide, there are at least 40 species of cormorants, and (according to Wikipedia) some are known to be able to dive as deep as 145 feet!

I found this YouTube video of cormorants flying near Salvo, NC. It is described as a Cormorant Feeding Frenzy, but I'm sure they are just traveling out to their feeding grounds. But the video will give you an idea of their numbers and their habits. Enjoy.

Our latest Ocracoke Newsletter is a 1910 article about waterfowl hunting. You can read it here: http://www.villagecraftsmen.com/news102114.htm.
Posted by Philip at 6:07 AM