I recently published several posts asking if readers could identify various Ocracoke people, places, and events from years past. Following are the answers to those queries, with links to more information. 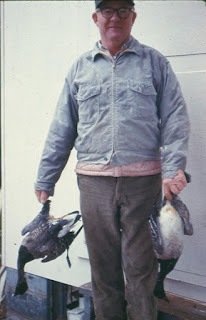 Next is a mid-twentieth century photo (from the Paul & Mary Ruth Dixon collection) of the remains of the five-masted schooner Carrol A. Deering, that wrecked in 1921. The capstan (partially obscured by the young lady on the right) is the distinctive feature that identifies the wreckage. 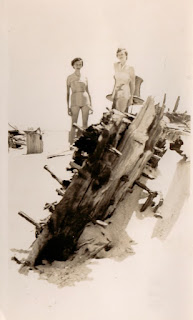 And finally, this photo was taken at the 4th of July pony penning sometime in the mid-1950s. This event took place where Ride the Wind Surf Shop and the Ocracoke Island Trading Company are located today. Capt. Marvin Howard, scoutmaster of the nation's only mounted boy scout troop, is astride the pony. His house is in the background, on the left. In the middle is the Homer & Aliph Howard house (where I live today), and on the right is the Herman & Flossie Spencer house (since moved, and now the Ocracoke Pizza Company). 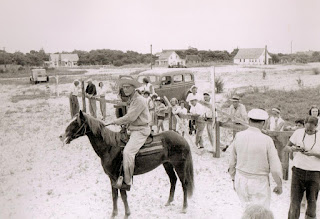 Our latest Ocracoke Newsletter is about islanders who worked on the water, and lost their lives at sea. You can read the Newsletter here: http://www.villagecraftsmen.com/news012116.htm.
Posted by Philip at 5:38 AM