The house in yesterday's photo is the James Hatton Wahab house. Below is a photograph I made a few days ago. 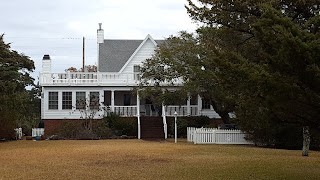 This 1 1/2 story central gabled house was built ca. 1886. The columned stoop and porches visible in yesterday's photo were added in 1936-1937. The house was raised, additional rooms added, and the porches expanded around the turn of the 21st century. This house was originally built for James Hatton Wahab (1861-1915) and his wife Martha Ann Howard Wahab (1867-1949). James Hatton was a notable islander who served in the US Life-Saving Service.

Hatton and Martha Ann's son, Robert Stanley Wahab (1888-1967), continued to live in the house. Stanley established and operated the island's first ice and electric plant, began the Wahab Village and Wahab Hotel (now Blackbeard's Lodge), and turned the former Odd Fellows Lodge building into an inn that was the forerunner of today's Island Inn.

Stanley Wahab was one of Ocracoke's first native entrepreneurs and one of the first to envision the island's tourist potential. Stanley's widow, Myra Wahab (1903-2002), lived in the house until her death. Stanley's nephew, Chip Stevens, owner of Blackbeard's Lodge, and his family live there today.

Our latest Ocracoke Newsletter is Ellen Marie Cloud's first-person account of the Great Ocracoke Lighthouse Window Heist. You can read it here: http://www.villagecraftsmen.com/news012117.htm.
Posted by Philip at 6:00 AM