For many years historians have speculated about the origin of Ocracoke's semi-wild ponies, actually small horses. The general consensus is that they are probably descended from Spanish mustangs.

In 1524 Giovanni da Verrazzano explored the Outer Banks but made no mention of horses. In 1584 the account of Captains Master Philip Amadas and Master Arthur Barlowe (of Sir Walter Raleigh's first expedition to America) mentioned reports by natives  of "of a ship cast away" "five and twenty years past" from which "white people" were rescued. Perhaps that ship was a Spanish Galleon that also transported mustangs. 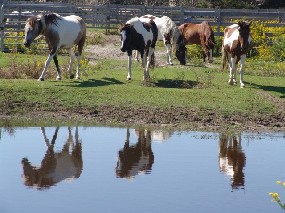 In 1585 English explorer Sir Richard Grenville made his first voyage to "Virginia" for Sir Walter Raleigh. In June his expedition anchored at Isabella, on the north side of Hispaniola (the Caribbean island shared today by the Dominican Republic and Haiti).

After enjoying a banquet and sport provided by the Spaniards, Grenville writes that "many rare presents and gifts were given and bestowed on both parts, and the next day we placed the Merchants in bargaining with them by way of truck and exchange for diverse of their commodities, as horses, mares, kine, bulls, goats, swine, sheep, bull hides, sugar, ginger, pearl, tobacco, and such like commodities of the Island."

On the 26th of June Grenville's account indicates that they "came to anchor at Wocokon [Ocracoke]." Since Grenville's ships now had horses on board it is not without merit to speculate that these might be the ancestors of today's Banker ponies.

No doubt other horses were introduced to the island over the next two hundred years, both more shipwreck survivors as well as animals brought by early European settlers. The smaller, hardier strains were able to survive and flourish in the island's salt marshes.

Today, a remnant herd of Banker Ponies is confined to a large pasture, and cared for by the National Park Service and island volunteers.

Our latest Ocracoke Newsletter is the story of the Electrification of Ocracoke Island. You can read it here: http://www.villagecraftsmen.com/news022117.htm.
Posted by Philip at 5:36 AM