Before the widespread use of outboard motors, and even still sometimes today, Outer Bankers harvested oysters in Pamlico Sound with the use of oyster tongs. Oyster tongs work much like post hole diggers, but the handles (or shafts) are much longer (as long as 12 or 15 feet), and the "working end" consists of two wide rakes. The following photo was published in the Spring, 1978, issue of Sea Chest, a non-profit educational project of the students of Cape Hatteras School. It shows Mr. Walton Fulcher holding his oyster tongs.

The tongs are lowered over the side of a skiff, and into the water. The handles are spread apart and moved around to feel for oysters. Then the tongs are shut together, and the oysters pulled to the surface. The following photo is from the State Archives of Florida, Florida Memory, http://floridamemory.com/items/show/6894. 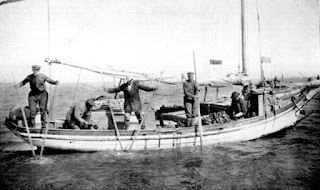 According to the Sea Chest article, "the money wasn't good back then [in the early 20th century] because they only got 50 cents to 75 cents a bushel. In the summer time [fishermen] depended on fishing but in the winter they depended on the oysters very much.... After we got out-board engines they got oyster scrapes [also called dredges] and started scraping for oysters."

Our latest Ocracoke Newsletter is the story of the Electrification of Ocracoke Island. You can read it here: http://www.villagecraftsmen.com/news022117.htm.
Posted by Philip at 5:21 AM