"CHICAGO, Dec. 24. —A special to the "Tribune" from Norfolk, Va., says: The British steamship Ariosto, Captain Baines, bound from Galveston to Hamburg, was wrecked at 4 o'clock this morning, six miles south, off Hatteras, N. C, and twenty-one of the crew were drowned. Captain Baines and eight of the crew were saved by the heroic efforts of the Ocracoke life saving crew, under Captain James Howard. Those who lost their lives attempted to reach the shore in a small boat, which was swamped shortly after it put off from the ship. Captain Baines and the eight men remained aboard and were landed by the life savers in the breeches buoy, but not until after a struggle which lasted all day."

Several weeks ago I was chatting with a neighbor about the wreck of the Ariosto, and he told me his wife's grandmother had come into possession of a wooden bucket from the ill-fated ship, and had passed it down to her granddaughter. A few days ago I stopped by to take a look. Here is a photo of the bucket: 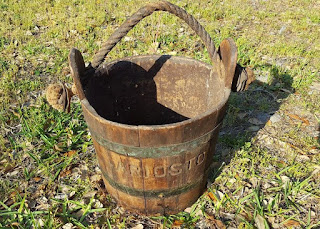 If you enlarge the photo you can clearly read the name, "Ariosto," carved into the bucket. Look for more about the wreck of the Ariosto in a future Ocracoke Newsletter.

This month's Ocracoke Newsletter is the entertaining story of Calvin Wilkerson and his Condomed Nautilus. You can read it here: https://www.villagecraftsmen.com/news042117.htm.
Posted by Philip at 5:09 AM