In November, 2016, I published a post about the origin of the Outer Banks name Nags Head. Although it is certain that the name does not derive from the activity of "wreckers" (unscrupulous bankers who would lure sailing vessels close to shore by tying lanterns around horses' heads or necks), I was uncertain where the name came from.

Recently I had an email from author Kevin Duffus (Looking Glass Productions), with this explanation:

"Contrary to the various urban legends, the name was first applied to the sand dune that is today Jockey’s Ridge. I discovered this some years ago and received David Stick’s endorsement that I was correct.... The 'Nags Head' was an abbreviation for 'Nags Headland' which appeared on a 1794 sea chart published by a Capt. N. Holland. On it you can clearly see the dune so identified. It was considered a headland because it was used as a navigational feature for coasting vessels." 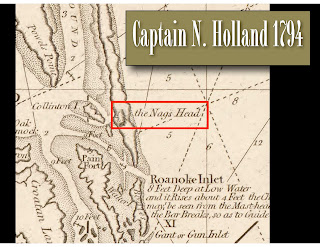 "A headland (or simply head) is a coastal landform, a point of land usually high and often with a sheer drop, that extends out into a body of water. It is a type of promontory." (https://en.wikipedia.org/wiki/Headland)

Our latest Ocracoke Newsletter is the story of the Ocracoke Water Tank Caper. This is the link: http://www.villagecraftsmen.com/news032117.htm.
Posted by Philip at 5:41 AM