﻿The 2017 Ocracoke Student Arts Partnership and Arts Week will tell the Tale of the wreck of the Black Squall on Ocracoke in 1861. It's a fascinating story of a traveling circus that made an unplanned stop at Ocracoke Island. 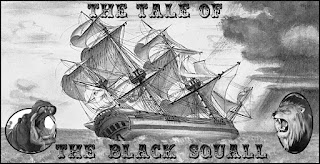 The activities and classes with these two programs will culminate in a student community performance of The Wreck of the Black Squall at 7 PM, Thursday, April 13 at the school gym. Both the Arts Partnership and Arts Week will include elements of performing arts from juggling and steel drums, to singing and tumbling. Each group of students, will have opportunities to showcase what they have learned as part of a retelling of this fascinating Ocracoke story.

When the Black Squall wrecked off of Ocracoke Island in April of 1861, the storm washed ashore the remnants of a circus troupe, including giant tents, silk ribbons, dancing ponies, and a menagerie of animals. Walter Howard wrote an account of this wreck in the 1950s, as he learned it from Old Kade Williams, who was 17 in 1861. Nixon’s Circus, sometimes called Nixon’s Royal Circus and Menagerie of Living Animals, was en route from a performance in Havana, Cuba to Philadelphia, when it encountered a terrible storm.

If you are on the island this week, be sure to come out to the school at 7 pm Thursday to see the performance. If you can't be there you might want to watch a video of Philip Howard telling the story.

Our latest Ocracoke Newsletter is the story of the Ocracoke Water Tank Caper. This is the link: http://www.villagecraftsmen.com/news032117.htm.
Posted by Philip at 5:55 AM