Windmills on the Outer Banks

Visitors to the Ocracoke Preservation Museum may notice a millstone displayed in the front yard. 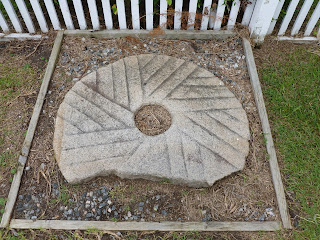 From the first half of the 18th century until the early 20th century more than 150 windmills dotted the coast of North Carolina. At least sixty-five mills were located in Carteret County, twenty-one in Dare County, and twenty-four in Hyde County. Four, perhaps more, were situated on Ocracoke Island. 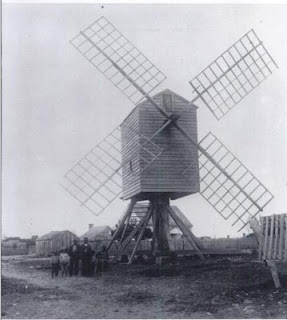 These mills, of German design, were developed in Europe in the twelfth century, and the designs were brought to America by the British as early as 1621. Post mills consisted of a wooden house (the main body of the structure) that was mounted upon a 10’ – 12’ vertical post supported by diagonal braces.


The typical house was about 10’ square, and 12 or more feet tall with a gable or gambrel roof. Four external rectangular frames were affixed to a large cross attached to a horizontal axle protruding from the upper section of the house. These frames were covered with canvas sails that could be reefed to adjust the speed of revolution for varying wind velocities.

The entire structure could be rotated around the vertical post in order to harness changing winds by means of a 25’ – 30’ tail pole that was attached to the house. On the far end was a wheel that rested on the ground or on a circular metal or wooden track. By simply pushing the tail pole the windmill could be rotated to face wind coming from any direction.

A removable ladder provided access to the inner workings of the mill, a series of wooden wheels and cogs connected to the wind vanes that turned the grinding stones.

Most Outer Banks windmills were put out of service during the Great Hurricane of 1899. They were never rebuilt.

This month's Ocracoke Newsletter is a transcription of a letter describing the September, 1944, hurricane, its aftermath and cleanup. You can read the letter, with vintage photographs added, here: www.villagecraftsmen.com/news102117.htm.
Posted by Philip at 6:00 AM