From the turn of the 20th century until the early 1950s mail, passengers, and some freight was delivered to Ocracoke by one of several mail boats which were designed like the distinctive North Carolina shad boat. The Aleta, which carried mail and passengers from 1938 until 1952, is the best known island mail boat. 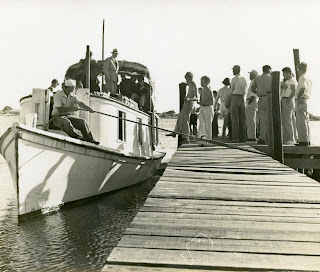 But there were others. Motor powered mail boats that crossed Pamlico Sound from Beaufort, Morehead City or Atlantic included  the Meteor, the Hero, the Viola, the Lillian, The Kitty Watts and the Ripple. In 1953 Ansley O'Neal, captain of the Dolphin, secured the mail contract. The Dolphin operated until 1964, although mail also came by way of Hatteras soon after Frazier Peele established a private ferry service across Hatteras Inlet in 1950. The Dolphin, the last of the island's mailboats, made its last delivery in 1964.

In the nineteenth century and before, bugeye sailing vessels brought mail and freight to Ocracoke.

Today mail is delivered to Ocracoke by truck and ferry across Hatteras Inlet.

To be notified when we publish a new post simply add your email address in the box at the top right and click "submit."
Posted by Philip at 4:20 AM