One of the Most Mischievous and Vilest Villains

On 14 July, 1719, Capt. Ellis Brand of HMS Lyme penned a letter to the Lords of Admiralty. In it he referenced William Howard, quartermaster to Blackbeard the Pirate who many believe was the same William Howard who later became colonial owner of Ocracoke Island, as "one of the most mischievous, vilest villains that had infested that coast.” Author Kevin Duffus (Looking Glass Productions) photographed these two pages of the letter at the British Archives at Kew, and graciously offered to allow me to post them here. 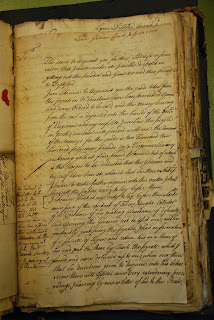 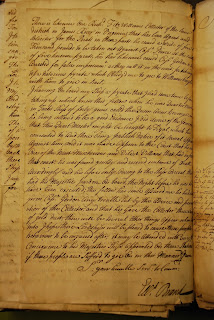 Here is my best transcription of the relevant passage:

I having on board my Ship a pyrate that I had some time before taking up which knew this fellow when he was Quartermaster in Tachs Ship of forty guns call’d the Queen Anns Revenge, and he being allow’d to be a good Evidence I did desire of the Governor that this Quartermaster might be brought to Tryal, which he concented to and there being publick Notice of it several appeared against him, and it was made appear to the Court that he was One of the Most Mischevious and Vileist Villians that had infested that coast; he was found guilty and receiv’d sentence of Death Accordingly and his life is only owing to the Ships Arrival that had his Majesties pardon on board, the night before he was to have been exicuted; ....

In the interest of  providing some balance to the legacy of my probable ancestor, Kevin added this comment in his email to me: "I’m sure that William Howard was not so vile. Mischievous maybe, but not vile. At some point I hope to remember where I read that Howard had traveled to the Bahamas to testify on behalf of a physician forced into piracy by Blackbeard."

Our latest Ocracoke Newsletter is Part II of Crystal Canterbury's account of her first visit to Portsmouth Island. You can read it here: http://www.villagecraftsmen.com/news052115.htm.
Posted by Philip at 5:38 AM