According to the NCDOT Ferry Division, the Provincetown III, a catamaran-style passenger ferry will visit the Outer Banks today and tomorrow, May 4-5, The Ferry Division says it could be a glimpse into the future of a new type of ferry service between Hatteras and Ocracoke. During that visit, NCDOT Ferry Division officials will be offering members of the public a chance to tour the ship for themselves and provide valuable feedback as they study the idea of passenger service between the two villages. 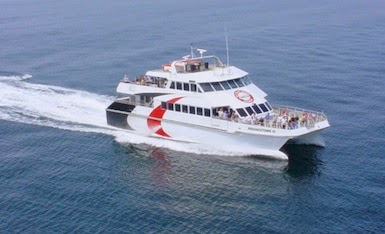 Members of the public will be allowed to tour the ship between 4-7 p.m., while the Ferry Division conducts an open house meeting between 5 and 7 p.m. at the Ocracoke School gymnasium.

"This is the public's ferry system, and establishment of passenger ferry service would be a significant change to that system," said Ferry Division Director Ed Goodwin. "We hope that people will turn out to take a look at the ship and give us any feedback they have on any aspect of this idea."

NCDOT has hired the consulting firm Volkert to conduct a feasibility study on passenger ferry service between Hatteras and Ocracoke Islands as an additional alternative (not a replacement) to the car ferries now running the route. The study is scheduled to be completed by December, 2015.

Our latest Ocracoke Newsletter is an article by island resident, Crystal Canterbury, about her very first visit to Portsmouth Village, on the last day of 2014. You can read Part I here: http://www.villagecraftsmen.com/news042115.htm.
Posted by Philip at 5:35 AM