In 1879, the Annual Report of the United States Life-saving Service called for the provision of draft horses at Life-saving stations on our coast. The appeal was repeated regularly. The following excerpt from the 1886 Report explains the urgent need. The USLSS was established in 1871. Horses were eventually employed beginning sometime in the late 19th century.

"Another urgent requirement...is the provision of horses. The lightest burden of apparatus or life-saving appliances needed at a wreck is at least a thousand pounds, and at present...this has to be drawn by men. It is probable that to fully realize the heavy task involved it would be necessary to actually see with the eye the group of seven surfmen harnessed to the loaded cart, violently tugging in oblique positions, almost inclined to the ground under the strain of the burden, as they toil forward to the scene of the shipwreck.

"It must be borne in mind that their load has often to be dragged through a slough of wet sand, against the stress of a winter gale, and that the journey will generally vary from one to three or four miles from the station [on Ocracoke Island the journey sometimes amounted to six or eight miles!]. Hence they must arrive seriously fatigued at the point where the severe labors of the direct operations at the wreck are to begin, and where they need their freshest energies. Equally bad, owing to the circumstances of their necessarily plodding progress with their grievous load, is the delay involved in reaching the wreck, a speedy arrival at which is so obvious a necessity that every one could wish that the rescuing party might come tearing along the beach at a gallop, with the speed of an engine racing to a fire." 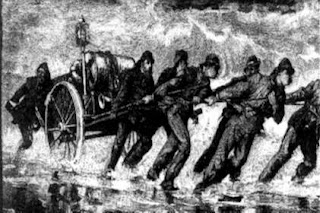 This month's Ocracoke Newsletter is about the 1977 recording of traditional Outer Banks folk music. You can read the article here: http://www.villagecraftsmen.com/news032116.htm.
Posted by Philip at 5:45 AM