The following undated photo is courtesy of the Outer Banks History Center. It shows members of the United States Life Saving Service practicing their drill for the rescue of sailors aboard shipwrecked vessels. 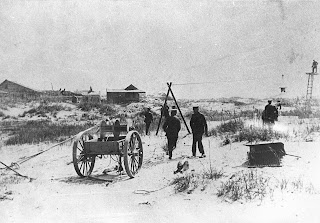 If you click on the photo to enlarge it, you can see the bronze Lyle Gun just below the two life savers in the center of the picture. The Lyle Gun, a small cannon, shot a projectile, hemp line, and instructions to the stricken ship. In a series of maneuvers, sailors on the ship tied a hawser and whip line to a mast, and the other end was secured on the beach. Crew members and passengers could then be transferred to shore by means of a "traveling block" and canvas "breeches buoy" (hanging from a line attached to the stand and ladder on the right of the photo).

This photo was probably taken in the late 19th century near Nags Head or on Hatteras Island. Most rescues were performed in gale force winds and rough seas, often in cold winter months. Some required the life savers to risk their own lives in open surf boats.

Chapter eight of my book, Howard Street Hauntings and Other Ocracoke Stories, has a detailed description of the live-saving operation.

Our latest Ocracoke Newsletter is the story of Beatrice Wells, child evangelist, who preached at Ocracoke in the late 1930s/early 1940s. You can read it here: http://www.villagecraftsmen.com/news022116.htm.
Posted by Philip at 8:39 AM