On March 1, 1837, "[Ocracoke Island] Justice of the Peace, Jacob Gaskill and his cousin & local tavern owner, Willis Williams, were involved in an altercation on a foot bridge that spanned the 'Ditch,' the narrow channel that connects Cockle Creek (Silver Lake Harbor) with Pamlico Sound. When it was over Williams lay mortally wounded from a musket ball to his neck. Gaskill was tried on the mainland and convicted of 'felonious slaying.' His punishment was the letter 'M' branded in the palm of his hand.

"Many of the details of this event are lost to history, but one can't help but wonder what the dispute was about, why it escalated as it did, and what the jury learned that kept Jacob Gaskill from the gallows, convinced them to return a verdict of less than murder, and led them to impose a relatively light (light, considering the alternatives...but admittedly barbaric) punishment. We will probably never know."

In 1993 Ellen Fulcher Cloud discovered a map of Ocracoke in the John Herritage Bryan (a New Bern lawyer) Collection in the NC State Archives. The map appears to be related to the trial of Jacob Gaskill. 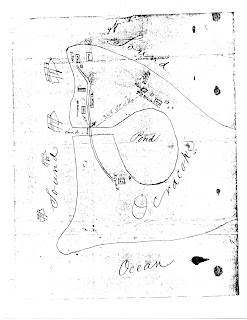 The map is interesting because it shows several stores (T. S. Blackwell, J. Pike, and W. Williams), as well as the bridge across the Ditch.

For more information about the murder of Willis Williams, see http://www.villagecraftsmen.com/news112114.htm.

Our latest Ocracoke Newletter is the story of Augustus Cabarrus, early inlet pilot, and the present day d'Oelsnitz family. Click here to read the Newsletter: Ocracoke...The French Connection.
Posted by Philip at 5:38 AM