Years ago I discovered an old magazine. The cover and other identifying information was gone, but it contained this paragraph:

"Less well known, perhaps, than the area's fishing appeal, is the fact that Ocracoke Inlet was vital to the armies of General George Washington during the Revolutionary War. Ocracoke Inlet seemed to the British to be too small and insignificant to require a blockade. The shoals were dangerous, and skillful pilots were needed to navigate the waters with safety. Ocracoke, through the help of the area's loyal patriots, became a great channel of supply for American troops."

As the authors of The Story of Ocracoke Island write, "The part played by Occacock Inlet in the Revolutionary War was vital indeed to the armies of General Washington." 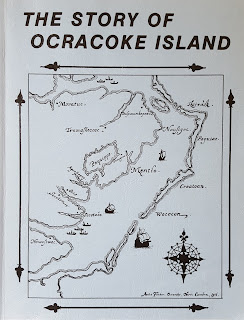 The Story of Ocracoke Island includes six paragraphs about Ocracoke and the Revolutionary War, as well as 64 pages of island history, stories, and photos. It is a perfect introduction to island history.

This month's Ocracoke Newsletter is an article about one of the early July 4th Parades written by Alice Rondthaler in 1953. It is accompanied by vintage photos.You can read the Newsletter here: http://www.villagecraftsmen.com/news062116.htm.
Posted by Philip at 5:37 AM