Today at 11 am, a ceremony to remember the crew of the HMT Bedfordshire, an armed British trawler that was sunk by German U-boats, will be held on Ocracoke at the British Cemetery. Organized by the War Graves Committee on Hatteras, this ceremony honors sailors who lost their lives off the coast here May 11, 1942. 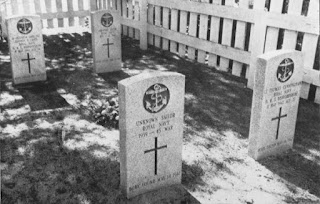 Following is an article about this tragedy that appeared in The Coastland Times, Friday, May 23, 1952:

May is the month of Memorial Day and a time for decorating the resting places of revered and loved ones. Public ceremonies will be held at many of our National cemeteries where those who sacrificed their lives for their country are laid to rest. And although no such public ceremony will take place at the little British graveyard on Ocracoke Island, far away in England are those who will think lovingly of dear ones buried here and at other places along the Carolina Coast--victims of the intensive submarine attacks ten years ago in May 1942 when British and American ships were desperately patrolling off the Atlantic Coast.

There are several wartime graves upon the Carolina Reefs bearing this May 1942 date. Some are identified; some are marked "Unknown". A grave at Cape Hatteras bears the inscription "Michael CAIRNS, May 7, 1942". CAIRNS was identified as one of the crew of the British San Delfino sunk by a German submarine 20 miles north of Diamond Lightship Station buoy in late April 1942. The ship was carrying high test gasoline from a Texas port to Liverpool. CAIRNS was the fourth engineer aboard his ship. At the same time other bodies, one identified as that of Maldwyn JONES, gun crewman, came ashore on Core Banks and were buried in Morehead City

The little British graveyard on Ocracoke Island contains four graves, two of which are marked "Unknown". A third bears the name of Lt. Thomas CUNNINGHAM; the fourth that of Stanly R. CRAIG, AB. The words "Royal Navy" and "Body found May 14, 1942" are inscribed on all four of the bronze plaques on concrete crosses erected at the time of burial. All bodies were identified as members of the crew of HMS Bedfordshire which disappeared with all aboard enroute from Norfolk to Morehead City, it's temporary home port. A body found at Cape Hatteras at about the same time was also identified as off the Bedfordshire, though the name of the sailor is unknown. Another body was found on a shoal far up Pamlico Sound and was buried at Swan Quarter. Rites at Ocracoke were held by the late Amasa FULCHER, prominent layman of the local Methodist church. A year later at Mrs. CUNNINGHAM's request, a Catholic service was held by the Navy Chaplain, then stationed here.

Land for the British burials was given by Mrs. Alice WILLIAMS near the WILLIAMS family graveyard. Markers were made by the T.A. Loving Construction Co. then building the Navy Base nearby. One Ocracoker, by strange coincidence, had talked with Lt. CUNNINGHAM a night or two before the Bedfordshire left Norfolk. They had met at a crowded table in a restaurant where Wahab HOWARD had told them something of Ocracoke Island. He had noticed the watch and signet ring on the hand of one. It was this same watch and ring together with a bank book found in his pocket that identified CUNNINGHAM as one of the victims of the submarine disaster. The Bedfordshire was due at Morehead City one day later but never reached that destination and none of its officers and crew lived to tell the story of its disaster.

This month's Ocracoke Newsletter is the entertaining story of Calvin Wilkerson and his Condomed Nautilus. You can read it here: https://www.villagecraftsmen.com/news042117.htm.
Posted by Philip at 5:29 AM