"Buffalo Lithia Waters, Nature's Materia Medica." So reads the embossing on this large bottle found on Ocracoke by Bradford Gaskins some years ago. 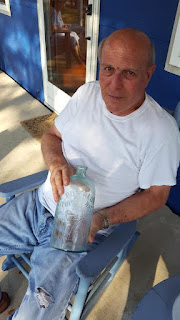 Brad showed me the bottle, but didn't know any more about it other than that he found it on his family land. I promised to do some research. I soon learned that the bottle, produced by "Virginia Buffalo Lithia Springs," contained spring water sold as “Natures Great Specific for Dyspepsia and Gout”

According to a web site I discovered, "The first European-Americans to visit Buffalo Springs in Virginia and record their visit are believed to have been a survey group led by William Byrd II in 1728. In his diary, later to be published as 'The History of the Dividing Line: a Journey to Eden', Byrd poetically wrote that the waters of Buffalo Springs was 'what Adam drank in Paradise, by the help of which we perceived our appetites to mend, our slumbers to sweeten, the stream of life to run cool and peaceably in our veins, and if ever we dreamt of women, they were kind.' Byrd's survey party also sighted many signs of buffalo near the springs, hence the name Buffalo Springs."

For several decades after 1876 the water was bottled and sold in thousands of stores. Sales plummeted after the Pure Food and Drug Act determined that the water had no medicinal value.

You can read more about Buffalo Lithia Waters here: https://www.antique-bottles.net/showthread.php?279284-buffalo-lithia-water-bottle.


This month's Ocracoke Newsletter is the entertaining story of Calvin Wilkerson and his Condomed Nautilus. You can read it here: https://www.villagecraftsmen.com/news042117.htm.
Posted by Philip at 5:29 AM