The interview begins with Brown presenting Wilkinson with a complimentary copy of the Spring, 1984, issue of Life on the Pamlico. The cover photo (from the 1930s) shows Stanley Wahab of Ocracoke, another man, and a dog standing on an Ocracoke Island pier. 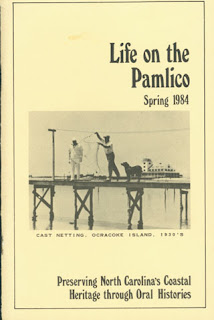 Pat Brown: Is that right?

Wilkinson: Yes. He was David’s [Wahab {actually, Brown’s annotation here is incorrect; Wilkinson was talking about the dog that belonged to David Gaskill, owner of the Pamlico Inn, not Stanley Wahab}] favorite. He had a bad habit of swimming, jumping out in the sound when a boat was coming in. Swimming around and picking up trash. David said that he would beat him three or four times a night but he persisted in doing it and finally one day he came in with a quart bottle of liquor in his mouth that somebody had lost over a yacht out there. Liquor was more precious than gold in Ocracoke in the early 1930s. So he said he apologized to the dog for having beat him and told him that he could jump overboard as many damn times as he wanted to. I said, “Did the dog take you at your word?” And he [Wahab {again, Gaskill}] said, “You saw him this morning swimming around out in the sound.”


This month's Ocracoke Newsletter is a brief history of Howard's Pub. You can read it here: https://www.villagecraftsmen.com/news082117.htm.
Posted by Philip at 5:26 AM