Yesterday I received this press release announcing Blackbeard’s Trial—Friday, Oct. 19, 2018. It will be interesting to hear how the judge rules!

In conjunction with the Town of Bath’s Tricentennial Celebration of Blackbeard, the Greater Bath Foundation announces “Blackbeard’s Trial—A Mock Hearing to Reconsider the Guilt or Innocence of the Pirate Blackbeard and His Shipmates From Bath, North Carolina.” The hearing will be held on Friday, October 19, 2018, at 2 p.m. in the Superior Courtroom at the Beaufort County Courthouse in Washington, North Carolina. 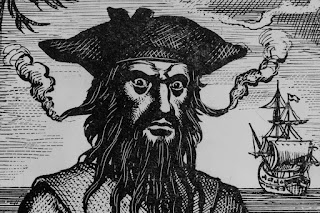 In November 1718 and the early winter of 1719 at Williamsburg, Virginia, four trials were held by a Court of Vice-Admiralty to consider the guilt or innocence of the surviving members of the pirate crew of Edward Thatch, aka Blackbeard. That crew, jailed under suspicions of piracy, included men who, according to deeds, wills, and estate inventories held in the Beaufort County Courthouse, were known to have been the sons and slaves of Bath and Pamlico region plantation owners. All of the records from those trials at Williamsburg nearly 300 years ago have been lost. However, by reassembling the facts of the case found in primary source documents, it is possible to fairly retry the case, and reconsider the guilt or innocence of the pirate Blackbeard and his shipmates from the Pamlico River and whether it was lawful for the colony of Virginia to dispatch armed forces into their neighboring colony of North Carolina. Seating will be limited. A portion of the courtroom is being reserved for selected students from Beaufort County Schools. Reservations for admittance will be required and can be made by emailing