Marsden Mats were originally developed by the US military during WWII for use as temporary runways and landing strips. Approximately 2 million tons of this material was produced, at a cost of about $200 million.

After the war these landing mats were laid down on Ocracoke Island soft sand to serve as roads. In 1957 a three mile section of landing mats at the north end of the island joined the nearly completed hard surface road (NC12) that, for the first time, connected Ocracoke village to Hatteras Inlet. 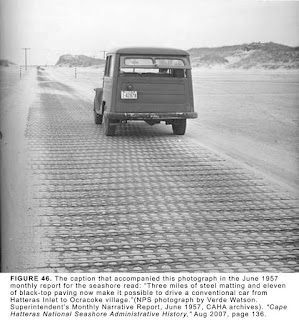 On March 24, 1959, the Pittsburgh Press ran an article by Gilbert Love describing coming to Ocracoke. Below is an excerpt:

Your “port” on Ocracoke is composed of several clusters of pilings. The ferry lets its ramp down on a piece of mesh landing strip laid across the beach. You drive off onto this – then discover that it’s your road. For three miles, across the low sandy northeastern end of the island, you drive on metal mesh little wider than your car. At frequent intervals another width is laid beside the “road” to make passing possible. Finally you reach higher ground – low dunes with scrub palmettos and evergreen yaupon on them – and the black top road that was completed last year [sic]. In marshes bordering the sea or Pamlico Sound you begin to see some of the wild ponies for which Ocracoke is famous.


This month's Ocracoke Newsletter is an essay by Philip Howard explaining why he decided to stay on the island as Hurricane Florence approached. You can read it here: https://www.villagecraftsmen.com/why-i-stayed/.
Posted by Philip at 8:18 AM