Surfmen, employees of the United States Life-Saving Service (there were 279 stations on the east coast, gulf coast, west coast and the Great Lakes), responded to more than 28,000 ships in distress, and saved the lives of more than 177,000 sailors and passengers during the 44-year history of the USLSS (1871-1915). Ocracoke had two Life-Saving Stations, one at Hatteras Inlet (established in 1893) and another in Ocracoke village (established in 1903). Who were these surfmen?

Sonny Williams, in his book, Unsung Heroes of the Surf, writes this:

"The requirements for appointment were these: Be between the ages of 24 and 45; be able to read and write; know basic arithmetic; be familiar with the conditions of the surrounding waters and be a skilled boatman with the ability to command men under extremely stressful conditions.

"The keepers were required to hire and train their own crew, who were to be selected from local men familiar with the handling of boats in the adjacent waters. They had to be in good health and under 45 years of age when hired...." 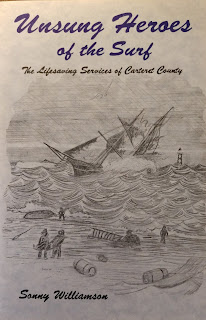 Jack Spencer Goodwin, in his foreword to Williamson's book, writes, "The bravery of the men of the Lifesaving Service is astounding. These men routinely risked their lives (and many lost their lives) attempting to rescue those in peril at sea. That they did not always succeed -- raging nature can mock the strongest efforts of man -- does not lessen their magnificent accomplishments."

This month's Ocracoke Newsletter is an essay by Philip Howard explaining why he decided to stay on the island as Hurricane Florence approached. You can read it here: https://www.villagecraftsmen.com/why-i-stayed/.
Posted by Philip at 6:11 AM