In August, 1921 the five-masted schooner, Carroll A Deering, wrecked under mysterious circumstances on Diamond Shoals off the coast of Cape Hatteras. The sails were set and food was in the galley stove, but only a cat prowled below decks. No other living soul was aboard. The Deering soon became known as the "Ghost Ship of the Outer Banks."

The schooner broke apart, and much of the wreckage washed ashore on Ocracoke, where it remained visible for more than 30 years. The Deering's windlass provided an iconic image for many a professional and amateur photographer. In 1955 a storm carried the remains of this once grand ship to Hatteras. For years it rested in front of Wheeler Ballance's Texaco station in Hatteras village, where it was when my mother made this snapshot. 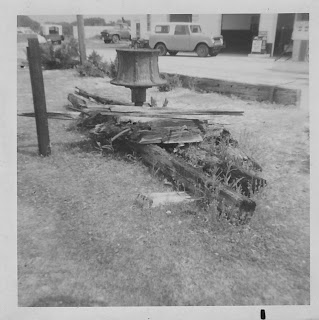 Today, the remains of the Deering are on display in the Graveyard of the Atlantic Museum in Hatteras. Stop by the museum for more information about this vessel and the mystery that still lingers concerning the captain and crew.

Looking for holiday gifts? Village Craftsmen's on-line catalog is filled with quality American hand crafts. Click on the photo below to visit our page of Amanda Wolf's durable and functional pottery inspired by nature. 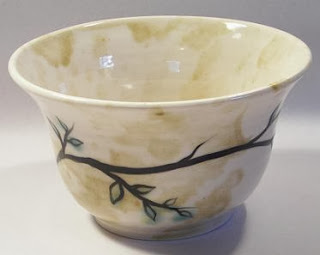 We suggest you place your orders as early as possible. Unfortunately, because of the closing of the Herbert C. Bonner bridge we are unable to offer expedited shipping this season.


Our latest Ocracoke Newsletter is a 1921 letter written by a former slave, Harrison Williams, to Ocracoke native, Martha Ann Howard Wahab. You can read it here: http://www.villagecraftsmen.com/news112113.htm.
Posted by Philip at 5:32 AM