Imagine my surprise yesterday when a friend called to tell me about a colony of honey bees that was attached to a large live oak tree on Ocracoke. 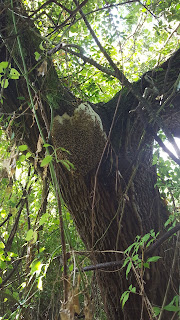 When a colony starts to feel crowded, which usually happens in the springtime as the queen lays more eggs and the number of workers increases, the colony will prepare to swarm...which is their way of reproducing.  The workers make new queens and when they are about to hatch, the old queen leaves to start a new colony elsewhere. 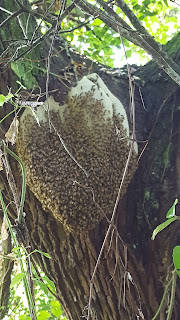 Typically about 60% of the worker bees leave the original hive with the old queen. This particular colony appears to contain about twenty-five-thousand bees, and is estimated to have been in this location for several months. 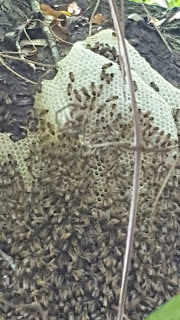 Luckily we have a friend who is a dedicated and competent beekeeper. She says the colony will not be able to survive a cold winter, and she has offered to use a bee vacuum (with just the right amount of suction to collect the bees alive) to capture the bees in a hive body. They will then be transported to a new, protected hive.

According to https://beespotter.org, "It is estimated that in North America around 30% of the food humans consume is produced from bee pollinated plant life. The value of pollination by bees is estimated around $16 billion in the US alone."

It is only fairly recently that these endlessly fascinating honeybees have taken up residence on Ocracoke. I wondered why the island was without honey bees for so long, and was told they will not fly over large bodies of water.

Our latest Ocracoke Newletter is the story of Augustus Cabarrus, early inlet pilot, and the present day d'Oelsnitz family. Click here to read the Newsletter: Ocracoke...The French Connection.
Posted by Philip at 5:23 AM