Dare Wright (1914 – 2001) was a children's author, model and photographer. She was born in Canada, but spent most of her childhood in Cleveland, Ohio. In 1957 her first children's book, The Lonely Doll, was published. It became an immediate success, making "The New York Times Best Seller" list for children's books.

Wright's second book, Holiday for Edith and the Bears, was published in 1958. 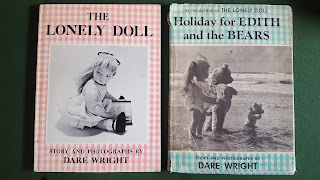 Holiday for Edith and the Bears tells the charming story of Edith and the bears "on a holiday on a sea island. There were so many wonderful things to do and see." All of the photographs were made on Dare Wright's beloved Ocracoke Island. 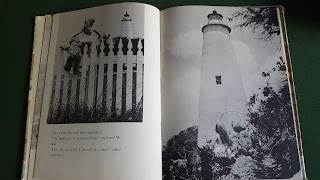 Dare Wright had 17 additional children's books published between 1959 and 1981. Ten of her children's books, including The Lonely Doll and Holiday for Edith and the Bears, are still in print. Her only book for adults, Ocracoke in the Fifties, was published posthumously.

Our latest Ocracoke Newsletter is about earthquakes that have affected Ocracoke and the Outer Banks. You can read the newsletter here: http://www.villagecraftsmen.com/news092116.htm.
Posted by Philip at 5:15 AM