I found this on the Friends of Portsmouth Island Facebook page:

"The churches on the island [Portsmouth Island] never had full-time ministers. A pastor came from Ocracoke once a month..... Sending the minister from island to island was not simple as an article from a 1948 issue of the 'Ocracoke Beacon' reveals: 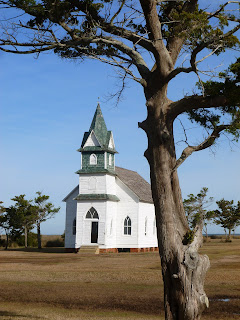 'The Rev. C.J. Tilley, Minister of the United Methodist Church, Ocracoke, narrowly escaped death by drowning early Wednesday morning when he stepped from the Ocracoke mailboat into the skiff to take him to Portsmouth. According to Roy Eubanks, of Beaufort, who was returning from his hunting lodge on Portsmouth to Beaufort, Mr. Tilley stepped from the mailboat, which was bound for Atlantic into the skiff before the skiff had come to a stop. He stepped on an oar, the end of which flew up and hit Mr. Eubanks on the chin and then he fell into the water which is approximately twenty feet deep at the point where the mailboat leaves mail and passengers for Portsmouth. The minister, wearing heavy clothes went under once, but was fished out the second time he came to the surface and was pulled aboard by hunters on the mailboat. He was then taken on to Portsmouth in the skiff.

'In 1930, Rev. Tilley returned to Portsmouth for a reunion celebration and recalled his first trip to Portsmouth. "I fell overboard on the way over. I tell my Baptist friends it was a complete immersion, Bible and all."'"

Our current Ocracoke Newsletter is a 1938 article about Capt. Gary Bragg, waterfowl hunting, and wooden decoy carving. You can read it here: http://www.villagecraftsmen.com/news112116.htm.
Posted by Philip at 5:54 AM